The first government license in the United States to allow the scientific study of marijuana for its pharmaceutical profit potential became effective only a few weeks ago.

The Washington State Liquor & Cannabis Board announced it would issue “the state’s first license to produce, process and possess marijuana for research purposes.” As you might deduce from the name, a board that formerly regulated alcohol sales added marijuana regulation to its mandate after voters in Colorado and Washington legalized recreational use in November 2012.

Read: Hemp is now legal in the U.S., what does that mean for pot companies?

The vote produced a strange result. It became legal to puff the stuff, but it was still illegal to breed and scientifically study it. The problem is that the U.S. government regulates marijuana under the same drug classification as heroin, despite the fact that some form of recreational or medicinal marijuana is currently legal in 35 states (depending on who’s counting) and Canada. Washington state actually needed three years to build a legal permit structure that would work around the federal ban.

The rapid rise of marijuana legalization has created what some people call a bubble for marijuana stocks. It’s reminiscent of the dot-com craze in 1999. An even more apt analogy might be the 1880s, when the transportation miracle promised by newfangled cross-country railroads stoked a mania for profits. Both ended badly: U.S. stocks fell 50% in 2000–2002, after adjusting for inflation, and a quarter of all railroads were bankrupt by 1894.

(It’s often said that psychoactive drugs can transport you, although I wouldn’t have any knowledge of this personally, of course.) 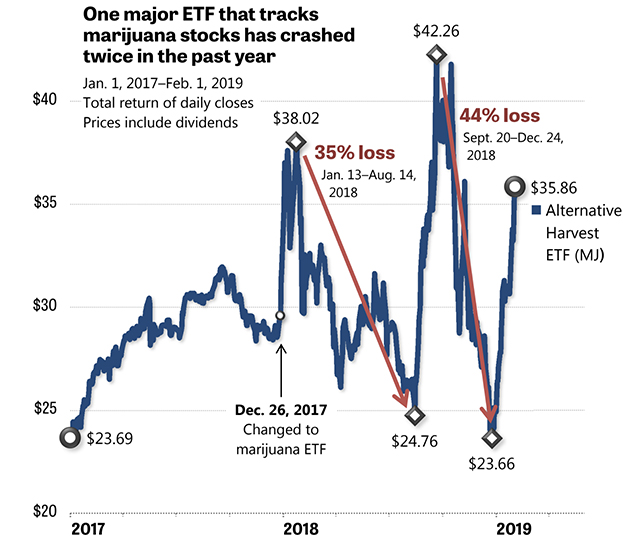 The graph above shows that one index of tradable marijuana stocks crashed 35% or more—twice—just in 2018. The Alternative Harvest ETF MJ, started its life as a little-known index of Latin American stocks. Then it changed its focus on Dec. 26, 2017, to a pure play on marijuana stocks. Its price soared and then cratered, an effect of legalization headlines that came and went. Similar index funds, such as the Horizons Marijuana Life Sciences ETF HMMJ,  had similar crashes, although not on exactly the same dates.

Today, a dozen or so legal marijuana companies trade for wild valuations. The accounting firm PwC Canada last year studied 15 of the biggest in North America.

Most of the 15 firms are losing money by the mega-kilo. So the usual valuation measures, such as price/earnings ratio (P/E), PwC said, “are just short of meaningless.” Instead, the accountants were forced to divide each company’s “enterprise value”—roughly similar to its market cap plus net debt—by gross revenue, since profits were almost nonexistent.

After excluding the highest and lowest outliers, the average company’s enterprise value was 103times its revenues.

By comparison, Bank of America BAC, has an enterprise value to revenue ratio of about 1.1. Apple’s AAPL, is around 3.1.

Many well-known companies trade at prices that are rich. But some of the biggest cannabis firms’ EV/Revenue ratios, as calculated by PwC, are sky-high:

Legal marijuana’s parallels to manias of the past are not lost on Shannon Vetto. She worked for 19 years at Russell Indexes. For the last six of those years, she was managing director of the division that produces the widely followed Russell 1000 RUI, , Russell 2000 RUT, , and many other benchmarks.

“People just started adding ‘cannabis’ to their names,” Vetto points out. That by itself made their stock prices shoot up. It’s an eerie echo of the way appending “.com” to a company in 1999 sent prices of that era into the stratosphere.

Vetto now runs SV Consulting in Mercer Island, Wash., and confers with many cannabis executives. “We know we’re in a bubble,” she says. “The peak of the indexed companies’ stock values occurred in January 2018. But all the news and all the hype came out in the summer of 2018, when the first plant-touching firm went public.”

That firm, which processes physical marijuana, was Tilray Inc. TLRY, , based in British Columbia. It went public on Nasdaq in July 2018. In August of that year, Constellation Brands STZ, , the maker of Corona and other beers, announced a $4 billion investment in Canopy Growth, sparking another round of buzz.

As an industry, it’s more dangerous than usual to invest in marijuana based on headlines. “If it hits the newspapers,” Vetto says, “it’s too late to get in.” Instead, the potential for life-changing pharmaceuticals—which could sell for big margins—is now the draw for early money.

“The unexplored value across all the uses of cannabis has never been researched,” Vetto says. “We only hear about THC [the psychoactive compound] and CBD [the pain and inflammation fighter]. There are more than 100 others.”

That brings us to the first company with a government license to actually breed and analyze cannabis. There are certainly many more research firms on the way. But Jessica Tonani, chief executive of pharma company Verda Bio in Seattle, has a head start on isolating miracle compounds formerly unknown to science (definitions provided by Green Relief of Canada):

Verda (the word means “green” in Esperanto) is a private company with only seven full-time employees, but it may wind up with bigger potential. Given the number of competitors, recreational marijuana may drift down to commodity pricing, since it grows like, well, a weed.

“I wouldn’t put a penny into recreational,” Vetto says. However, a buying crowd is piling in billions of dollars. Can the horde make a few cannabis companies’ stock prices soar even further? Sure. For example, any move at the U.S. federal level to accept state legalization could provide a short-term rally.

But with valuations as rich as they are today, you shouldn’t get too excited, unless you like watching your money go up in smoke.